In honor of Veteran’s Day, I thought I would do a little profile of one of my DORRIE ancestors. 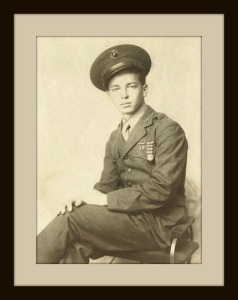 My maternal grandfather served as a Marine during WWII and Korea. The most memorable image I have of him is the one here. He looks so young, but so very proper and gentlemanly. This, naturally, led to my being curious about his military career.

A little about my grandfather. He was born Charles Theodore Dorrie on the 25th of June, 1925, in New York. His parents were Charles Frederick Dorrie (1891-1957) and Agnes Kisten Andersen (1894-1966) and in the last census before his enlistment, we find him with his parents, grandmother, and two older sisters.

Imagine this 14 year old boy just three years later enlisting in the United States Marine Corps. He did enlist, though, on November 27th, 1942, and shortly thereafter starts appearing on muster rolls like this one from January 1943:

In this one from July of 1943, we get a little more information about his responsibilities:

I’m not familiar with military research or with military abbreviations, so I hit up the kind souls at the Genealogy sub at Reddit and a superhero came through not only with an explanation about what “25, jdfr. VMSB-236, MAG-24, Post; 23-31” means (Marine Scout Bombing Squadron 236, Marine Air Group 24), but also with another tidbit:

Grandpa was proud of his service and a proud American, which in turn makes me proud, too. I remember attending a dinner with him during a visit late in his life. It wasn’t long after the 9/11 tragedies and being a native New Yorker, the attacks truly hit home for him. At some point during dinner, the maitre d’ stood over our table, his suit immaculate, his demeanor all that was hospitable. But my grandfather noticed one detail, something someone else might have overlooked but which has stayed with me for a long time. The man wore an American flag lapel pin, and it had turned upside down. My grandfather brought attention to this detail and rather than being annoyed or giving any appearance to this detail being unimportant, the man quickly fixed the pin and apologized to my grandfather.

This memory reminds me that in all things we must pay attention to the details. They aren’t insignificant and convey an image to people taking us, our work, our ethics, everything about us, in. And while that long ago maitre d’ quickly assured my grandfather he didn’t mean to convey disrespect, it would be nice to avoid misconceptions when we can and avoid the need to make apologies later and have to potentially regain lost respect. Its a nice life lesson and I thank my grandfather for learning it.

My grandfather passed away the 14th of July, 2002, and is buried in the Our Lady of the Magnificat in Kinnelon, Morris County, New Jersey.

Charles T. Dorrie’s Wikitree is incomplete as I’m writing this, but its on the “to do list”.

View all posts by mckons